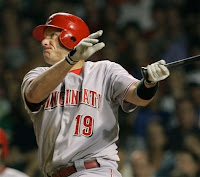 Today, the Reds completed the much needed trade of Jeff Conine, which frees up a roster spot and badly needed playing time for the remainder of the season. In the deal, the Reds acquired shortstop Jose Castro and centerfielder Sean Henn from the Mets, both of whom are low level prospects.

According to Baseball America, Sean Henn was the 23rd ranked prospect in the N.Y. Met farm system. Castro was unranked, but he has taken a step forward this season. Castro is only 5'8 and seems, at best, to be a backup infielder at the Major League Level. Here is what Baseball America had to say about Sean Henn:

"Henry has one of the better amateur pedigrees of anyone in the Mets system and hit .481 for USA Baseball's 2003 junior national team that included Billy Butler (Royals) and Neil Walker (Pirates), among others. He has tantalized the Mets with his athleticism, but it took him almost three seasons to get out of rookie ball. Henry is an aggressive hitter with good bat speed and impressive pop for someone of his size. He's a smart baserunner with above average speed that plays well on the bases and in the field. The former shortstop moved to CF last year and showed excellent aptitude there. His clean routes made him look like a natural, but he needs to make an adjustment with his footwork on throws, which differs from the infield. Henry also needs to stay within himself as a hitter because of his tendency to swing for the fences. The Mets were pleased with Henry's progress on both offense and defense in 2006 and he'll finally get a shot to open a season in a full-season league."

Conine, the 41 year old veteran, was no longer of use to a Reds team that is very likely to finish well below .500 this season. Accordingly, the Reds need to use the rest of this season to let prospects get their feet wet at the MLB level. This strategy also enables the Reds to evaluate talent to determine what they need in the offseason.

The Reds called up Jorge Cantu to fill Conine's vacated roster spot. Cantu seems likely to step right into Conine's role on the team and get ABs as the right handed platoon partner of Scott Hatteberg. It remains to be seen what will happen in September, when Joey Votto may well be called up to play 1b. That said, this is another good trade by Krivsky, as he got value (such as it is) for Conine, who was lost to the Reds after the season anyway, and freed up room to play younger prospects.

This is just the latest trade that looks like a winner for Krivksy and the Reds, as the Cantu and Lohse trades are both paying early dividends for the Reds. While a strong case can be made that Krivsky should have been more active at the trade deadline, it is hard to argue that the deals he has completed have been anything other than positive for the Reds.
Posted by Lark11 at 3:02 PM