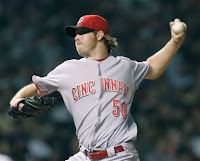 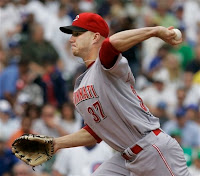 After years of futility and a number of false starts, the Reds are finally beginning to build a productive farm system. The Reds have struggled for years to develop quality pitching, but slowly there is a trickle of talent beginning to reach the Majors.

The two blue chip pitching prospects in the Reds farm system, Homer Bailey and Johnny Cueto, have both seen substantial success in the minors. Homer reached the Majors earlier this season, but is down in the minors on a rehab assignment. Johnny Cueto has been dominant at just about every level this year and is poised to make his big league debut either in September or in 2008.

Cueto is also emblematic of another vitally important development for the Reds organization, as he is one of the first prospects to be signed out of Latin America by the Reds revitalized international scouting effort. Adding good international prospects to the farm system each year in addition to those out of the draft is vital for the development of a good farm system. The Reds are finally back to doing so.

The Big Red Machine benefited greatly from international scouting, as Tony Perez was signed by the Reds in 1960 as an amateur free agent, Dave Concepcion was signed as an amateur free agent by the Reds in 1967, as were a few other lesser lights like Manny Sarmiento. Unfortunately, that stream of talent would eventually be dammed up by a shortsighted owner.

Under former owner Marge Schott, the Reds scouting and player development budgets were slashed. Marge believed that she could save money in these areas and plow some of the savings into the Major League roster by doing so. In actuality, Marge wasn't saving money at all, rather she was simply shifting the cost of her actions onto the backs of future Reds' teams. The Reds' organization has had to carry that heavy burden around for the past decade or two.

The Reds enjoyed some short term success, but they mortgaged the future to do so. The cost effective flow of young talent dried up, leaving the Reds struggling to fill holes at the Major League level with expensive free agents (Eric Milton, anyone?). The true cost of Marge Schott's decision is impossible to calculate, but the Reds certainly paid a heavy, heavy price.

While Bailey and Cueto are on the cusp of making their impact at the Major League level, it is a good idea to see what the Reds have to fill the void until they are ready. Bobby Livingston and Phil Dumatrait were both acquired from other organizations, but both are being viewed as potential starting pitchers for the Reds. So, let's take a look and see what we can expect out of them.

In short, the more crucial the situation, the worse his K/BB ratio. His HR/9 rate also worsens in crucial situations.


That is not a positive trend and to expect much out of Dumatrait would be unwise. He's a flyball pitcher who walks too many, strikes out too few, and seems to pitch worse the more crucial the situation. At this point, it seems unlikely that Dumatrait is ready to be a successful major league baseball pitcher. So, our nation turns its lonely eyes to Bobby Livingston.

In short, Bobby fared a bit worse as the situation got more crucial, but overall performed better than Dumatrait. Livingston also did a much better job avoiding the homerun in crucial situations.

It is often said that Dumatrait has better stuff, but that Livingston is a craftier pitcher. Perhaps these numbers begin to bear that out, as Livingston was able to maintain his level of performance more successfully than Dumatrait.

At this point, even though he was roughed up today, Bobby Livingston seems to be a more viable option to fill the 5th spot in the rotation in 2008. Livingston walks few and gets a heavy percentage of groundballs, but needs to do a better job of missing bats. That said, his performance and his baseball I.Q. make him a better bet for success in the 5th slot in the rotation.
Posted by Lark11 at 3:57 PM