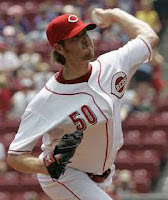 After four starts, 13.1 innings pitched, and 21 earned runs allowed the Reds had seen enough, as they demoted Phil Dumatrait back to AAA Louisville.

Given his poor situational pitching, weak K/BB ratio, and general lack of command in the minors, his struggles at the MLB level shouldn't really come as much of a surprise. Unfortunately, at this point Dumatrait just is not good enough to be an asset at the major league level. Granted, it's a small sample size, but let's take a look at his pitch data to get a handle on his performance.

During his MLB stint, Dumatrait threw 294 pitches, 168 of which were strikes and 126 of which were balls. So, Dumatrait threw a strike only 57% of the time (Harang: 66%, Arroyo: 65%, Livingston: 65%). It is sometimes said that the most effective pitch in baseball is the first pitch strike. Getting ahead early in the count puts the pitcher in control of the PA and opens up many more options from his arsenal. Unfortunately, Dumatrait only threw a 1st pitch strike 55% of the time (Harang: 65%, Arroyo: 65%, Livingston: 64%).

Accordingly, it seems only logical that Dumatrait would spend more time behind in the count, which is evidenced by the fact that 5% of the plate appearance involved a 3-0 count (Harang: 4%, Arroyo: 4%, Livingston: 1%) which is a bit disturbing when you consider that he issued no intentional walks.

Dumatrait did manage to strike out 6 hitters and all were swinging strikeouts. Dumatrait only managed to get to an 0-2 count in 12% of the plate appearances (Harang: 23%, Arroyo: 19%, Livingston: 18%) and wasn't able to effectively finish off the hitter, which raises questions about the lack of an out pitch. In 33% of 0-2 count situations Dumatrait allowed a hit (Harang: 5%, Arroyo: 6%, Livingston: 4%).

Unfortunately, Dumatrait was done in by a lack of control and just being to hittable. It is very difficult to be successful in the majors if you can't miss bats. If a pitcher gives up too much contact, then he will struggle to maintain consistent success. Dumatrait just allowed to much contact, as 86% of the time contact was made by the hitter when swinging (Harang: 78%, Arroyo: 81%, Livingston: 82%). It may not seem like a big difference, but around 85% seems to be the tipping point, above which sustained MLB success is difficult.

Again, it is undeniably a small sample size, but it does reflect many of the same problems he demonstrated in the minors, only amplified by a better caliber hitter. Hopefully, Dumatrait will head back to the minors, work on his game, and be able to contribute to the Reds in the future. However, at this point, that seems like a bit of a long shot.
Posted by Lark11 at 12:44 PM