The newly acquired Dallas Buck checks in at #12 on the list. I probably like Buck more than most, but he has a number of things going for him. He may be ideally suited for the Reds, as he possesses heavy groundball tendencies and is a natural athlete, as evidenced by being a two sport athlete at Oregon State before joining the professional ranks. He strikes me as being a potential sleeper, as injuries may have obscured his upside. In 2009, he will be a year farther away from his arm problem, so he could reveal a much better career trajectory than previously projected.

Oddly enough, Dallas Buck's baseball skills may be best defined by his time playing a different sport. Buck attended Oregon State and spent two years playing defensive back and special teams for the Beaver football team. That speaks to both his athleticism and his athletic mindset, which carries over to the diamond.

Buck had a very good career at Oregon State, but his junior season was hampered by an arm injury. Buck has a football player mentality and refused to shut it down, as he didn't want to let his teammates down in their quest for a College World Series Championship. He battled through the season and maintained a high level of performance despite diminished velocity.

The diminished velocity and the fear of injury it inspired caused his draft status to slip, as he was a projected first round pick before his junior year. The Diamondbacks selected Buck in the third round (two picks after the Reds selected Chris Valaika) and a subsequent physical exam uncovered the expected injury: a partial tear in the ulnar collateral ligament. Buck was likely to need Tommy John surgery before ever throwing a professional pitch.

Despite the likelihood that surgery would be necessary, the Diamondbacks agreed to let Buck attempt to rehab the injury. In 2007, Buck started out his professional career at high-A ball, where he posted a respectable 3.41 ERA, 1.18 WHIP, 2.9 BB/9, and 8.1 K/9 in 97.2 innings. He also demonstrated impressive groundball tendencies, as he posted a GB/FB ratio of 2.28.

As a sophomore, Buck's fastball sat in the 88-91 range and touched up to 94 on occasions. As a junior, his velocity dropped into the mid-80s, which was a clear sign that he was having arm trouble. However, his fastball has always had very good sink and he uses it to induce a ton of groundballs. Buck also features an average slider and an improving change-up.

In attempting to pitch through the injury in 2007, Buck was working without his good stuff. The UCL tear sapped his velocity and he was only throwing 86-88 mph with a lot of effort. The impressive thing is that despite working without his best stuff, Buck STILL managed to be successful. To me, that signifies an ability to pitch, not just throw. A lot of younger pitching prospects just rely on their pure stuff, but really don't know how to use it. Buck, obviously knows how to pitch. In addition to demonstrating the ability to succeed without his best stuff, Buck actually managed to impress scouts with his change-up.

In 2008, despite being healthy, Buck again is pitching without his best velocity, but again is finding success. The usual rehab time on Tommy John is 10-12 months, but the pitcher often isn't the same until the season after he comes back. So, Buck should finally be at full strength for the first time in his professional career in 2009. 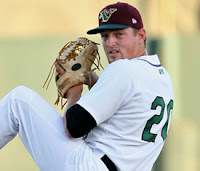 Buck doesn't have the cleanest mechanics, but they are functional. The athleticism that allowed him to play college football also allows him to repeat his delivery and maintain good body control.

Following the modern trend, Buck starts his windup by moving his glove side ("GS") foot slightly forward and towards first base, as opposed to the old style of starting the wind-up by stepping back towards second base. After he plants his glove side foot, he"un-weights" his pitching arm side ("PAS") foot and rotates it on the rubber.

In keeping with the modern pitching style, he only brings his hands up to his chest, not over his head as used to be traditional. Buck has a high leg kick and brings his leg up well past parallel. In his leg kick, he coils his lower body to store up energy. When his leg kick is at its highest point, Buck breaks his hands and begins to drive towards the plate. Buck really seems to get a good push off the rubber and uses his legs to drive his body towards the plate. A strong leg drive can help incorporate the entire body into the throwing motion, which can alleviate some of the stress on the arm that can be created by more of a "falling off the rubber" style pitching motion.

After Buck drives off the rubber, he plants his GS foot slightly to the third base side of mound. By planting his foot closer to third than normal, Buck is forced to throw slightly across his body. He utilizes a high three-quarter arm slot and uses a clean arm action, but this type of cross-fire action can lead to increased stress on the arm. In Buck's case, it isn't a significant cross-fire, but it's there. Another by product of the cross-fire throwing action is that it forces him to fall off to the first base side of the mound on his follow through. His pitching momentum is heading slightly towards first base to offset his somewhat closed body position, so his body naturally follows the momentum after he delivers the pitch.

Buck's mechanics certainly aren't the prettiest or cleanest around, but they do seem functional. He doesn't have any big red flags in his motion or arm action, but he does throw with some effort. It'll be interesting to see if he can stay healthy, as there isn't really anything significant in his motion that indicates a heightened injury risk.

The Reds won't quite know what they have in Dallas Buck until the 2009 season, as that's when he'll finally be at full strength, but I suspect they'll be pleasantly surprised. However, even at less than full strength he demonstrated some positives. His athleticism gives him good body control, his football experience gives him a warrior mentality, and his fastball has very good late sink, all of which makes him an intriguing prospect for the Reds.

While it is too soon to tell, Buck could be a very nice addition to the organization, as he has a solid skill-set and seems to be exactly the type of player the Reds need. Buck is the type of player who gets the most out of his abilities and puts the needs of the team before his own. Those seem to be the type of players commonly found on winning teams, which hardly seems like a coincidence.

The Reds could start Buck off at double-A Carolina for 2009, although I wouldn't be surprised to see him start off at high-A Sarasota for a month or two to build his confidence. While Buck will never be a dominant #1 starter, he may ultimately prove to be a solid mid-rotation starting pitcher. The 2009 season will go a long way towards revealing what type of pitcher Buck will be, but for now he checks in at #12 on the list.
Posted by Lark11 at 3:41 PM