Arthur Rhodes gets 2 years and $4M 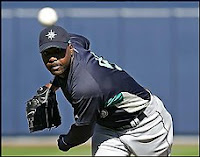 I suppose it's difficult to complain much about the Arthur Rhodes signing, but I'll do my best.

Why does this signing seem like deja vu all over again?

Let's see, the organization deems itself so desperate for a lefthanded reliever that they throw a multi-year contract at an elderly lefty coming off a single bounce back season after several years of lackluster performance.

Well, I suppose we can realistically hope for better, as Rhodes has much better stuff and is far less dependent on the team's defense. In 2008, Rhodes struck out 10.19 hitters per nine innings, while Stanton regularly sat in the ~6.0 K/9 range. Any time a Reds pitcher can avoid relying on the team's inept defense the better, so Rhodes has that going for him.

In addition, Rhodes mainted good velocity on his fastball, which averaged 91.4 mph and regained some velocity on his slider, which was back up to an average 83.6 mph for the first time since 2005.

So, while there are a few positives on Rhodes, I'm still not sure it was the best way to go. Over the past 3 years, Rhodes has been appreciably better against lefties (.220 BA and .295 OBP) than righties (.266 BA and .379 OBP), so Dusty will need to fight the urge to over-utilize Rhodes if this deal is going to work out at all.

Once again, the Reds have acquired a player who really doesn't seem likely to make the Reds appreciably better. At the very least, I suppose the risk is fairly low given the annual salary that he is set to make. However, I think the upside is rather limited as well and there is significant performance risk. Treading water seems to be the order of the day in Cincinnati this offseason. 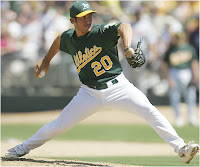 I would like to see the Reds pursue players who would actually improve the club. In this instance, I would rather have seen the Reds pursue Huston Street. The Rockies were rumored to want Aaron Heilman and Pedro Feliciano from the Mets in exchange for Street. It would seem that an equivalent Reds package would be Micah Owings and Billy Bray. If that's the case, I would have pulled the trigger and not thought twice. Bray is a nice pitcher, but I'm just not sure there is any more projection left in him, which would make him a solid lefty reliever and nothing more. The idea of a back-end of the bullpen consisting of Jared Burton in the 7th, Huston Street in the 8th, and Coco Cordero in the 9th is something devoutly to be wished, as the Reds could shorten games to 6 innings. That kind of shutdown bullpen would be the best in the NL and probably all of baseball. Not to mention, it would be the best bullpen the Reds have had since the Nasty Boys were roaming the earth.

To me, acquiring a player like Street would actually improve the team. Street is an impact player, while Rhodes is not. The cost is higher on Street, but so is the reward. The Reds are now in a position where they should be willing to pay a higher cost for a better player. They have the value in the organization to afford better, more long-term solutions. The days of having to settle for retreads and second-hand goods is over. So, once again, I'm underwhelmed by the acquisition, but this time I fear that it will blow up in a Mike Stanton type way.

The Reds should have set their sights higher than mediocre stopgaps like Ramon Hernandez and Arthur Rhodes. It seems like a missed opportunity, as they could have acquired players who were a cut above, like Jarrod Saltalamacchia and Huston Street. Impact players who could have pushed the Reds up the standings in 2009 and still been in the mix for 2010 and beyond. Instead, they have acquired players who will at best be stopgaps until as yet identified players arrive in the future to take over those roles.

Unfortunately, it seems like the continuation of yet another mediocre offseason for the Reds where the goal is to appear to be improving without actually paying the price to do so.

Reds baseball: Full of sound and fury signifying nothing.
Posted by Lark11 at 11:06 PM