Adam Rosales, a 12th round pick in the 2005 draft, is an enigma wrapped in a riddle. If Josh Ravin was the most depressing report to write up, then Adam Rosales may well be the most challenging. At this point, I'd be lying if I said that I knew exactly what to make of him, but let's take a look.

In 2008, Rosales had an extremely volatile season, which is in keeping with his entire professional career. The Reds sent Rosales to triple-A Louisville to start the 2008 season. On the season, Rosales posted a slash line of .287/.339/.463/.802 with a 82/22 K/BB ratio and 11 homers. The final line looks solid, but Rosales had to travel a difficult road to get there, as he started off the season ice-cold, but ultimately finished it white-hot. 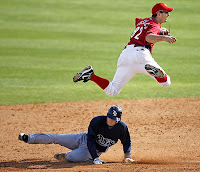 In April, he was ice cold with a meager .177 batting average and a paltry 9% line drive rate. His line wasn't much better in May, as he hit only .232, but he was driving the ball better as evidenced by his 22% line drive rate. In June, he finally got it going, hitting .299 with a .561 slugging percentage. In July, he kept it rolling by hitting .324 with a .471 slugging percentage and was even better in August hitting .436 and slugging .764.

In sum, Rosales got progressively better in each passing month of the season and finished out so strong that he earned a call-up to the majors in September. Unfortunately, major league pitching did what its minor league brethren could not, which is to say they poured cold water on Rosales's white hot streak, limiting him to a line of .207/.233/.241.

Ultimately, it's difficult to get a handle on Rosales, but once again it seems to come down to his place on the defensive spectrum.

Rosales has a swing only a mother could love. Ok, ok, so it's not that bad and it does have the advantage of actually being effective. Still, poetry it is not. Fortunately, Rosales adds a strong batting eye and good control of the strikezone, which really helps his swing play up.

At the plate, Rosales has a pretty straight forward set up, using a slightly wider than shoulder width stance. His stance is square to

the plate and he keeps his back elbow up. When he brings the bat up over his shoulder, he uses a bat waggle wherein he quickly and continuously moves the bat from vertical to horizontal while waiting for the pitch. When the pitch is delivered, Rosales basically rolls his front foot up onto the toe and puts it back down. He has very little forward stride in facilitating his weight transfer.

front foot and body earlier than the more conventional swings, but Rosales makes it work. When he takes the pitch the other way he has to stay on the ball longer and his swing can be a bit less "top-handsy." Even so, his overall swing mechanics create a downward plane to his swing (see photo: strong top hand action in swing). While it may be functional, the "chopping wood" approach isn't pretty. Still, production is what matters, as you don't get style points in baseball.

spectrum. Fortunately, the reason he was shifted to firstbase was to rest a sore throwing elbow, not because he couldn't handle a more challenging defensive position. That's good news for both the Reds and Rosales, as his bat doesn't profile well at firstbase.

It's difficult to know what the Reds plan to do with Rosales. He played primarily shortstop in college, but he just doesn't have the range to play there at the professional level. When he was promoted to the majors in 2008, he spent time at both secondbase and thirdbase. Ultimately, Adam's best position is likely thirdbase, as his range may be stretched at second. His range and lateral movement are good enough to handle thirdbase. Regardless, the presence of Brandon Phillips at secondbase means that it's not a real option for Rosales, so it's seemingly the hot-corner or bust.

Despite the elbow soreness of 2008, Rosales's best tool is his arm, 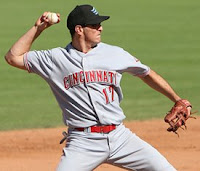 which is both strong and accurate. Given the very poor defensive performance of Edwin Encarnacion, it probably wouldn't be a bad idea to give Rosales an extended look at third, as I don't doubt that he's already a better third baseman than Edwin. However, the window may have closed on Rosales's chances to be an everyday player, as Edwin is currently blocking him and Todd Frazier and Juan Francisco are potentially better options for the future at the hot corner.

I still wrestle with the likely future of Adam Rosales, as part of me thinks he has the bat and defense to be a league average starter. Ultimately, his bat will determine his future role. Still, given the makeup of the Reds' roster and the volatility of his performance, Rosales likely projects as a utility player. His versatility on the infield is a positive attribute and perhaps the one the Reds are most likely to utilize. Even if he doesn't become an everyday regular, he could still have good value to the Reds, as versatile utility infielders with solid offensive skills don't grow on trees. Ultimately, Rosales will go as far as his bat will take him, but right now he projects as only an MLB bench player.