Is it time to consider signing Joe Crede?

Now, I'll preface this by signing that I'm not much of a Joe Crede fan. If we were to roll the dice with a top draw defensive third baseman with limited offensive skills, then I'd put Brandon Inge well above everyone else. But, building a baseball team requires flexibility and practicality, so maybe it's time to consider someone like Joe Crede. 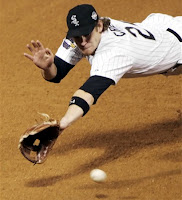 First, Crede would likely be inexpensive. The market for corner position players is soft, so a reasonable contract would be a real possibility. In addition, the Reds have gone on the record countless times stating that they want a right-handed bat for leftfield. Well, maybe the best option for that particular role is already on the team. Maybe, just maybe, it's Edwin Encarnacion that should be playing leftfield, which would open up third base for Joe Crede. Crede, of course, hits righthanded, so he would balance the line-up a bit more, even if he would be a poor fit to hit fourth between Joey Votto and Jay Bruce.

While it is undeniable that Crede doesn't have the offensive upside of some of the leftfielders being considered, he would give us a huge boost defensively, which may offset the difference in offensive value between Crede and a right-handed hitting leftfielder.

Here is Crede's Ultimate Zone Rating per 150 games for the past three years:

Now, here's Edwin's performance over the past 3 seasons:

Let's be generous and give Edwin his best level of performance and say he'll post a -11.5 in 2009, which means that he's 11.5 runs below average on defense.

So, the difference between the two is 21.5 runs, which works out to roughly a 2 win improvement simply by replacing an iron gloved Edwin with a quality gloved Crede. And, of course, I don't think it's a stretch to say that Edwin would be at least as capable in left as Dunn was in 2008, which means there would be no corresponding decline in leftfield defense to take into account (now, the downgrade from Dunn's bat to Crede's bat is another story, but I digress). 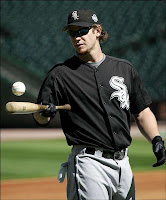 Unfortunately, Crede isn't much with the bat and his injury risk is a bit high, but there is improvement to be made with such a signing. In 2008, Crede's overall value to the White Sox was +18.1 runs, which makes him a 1.8 win player. His value would be higher for the Reds because of who he would be replacing, however, even standing alone Crede could prove to be a good value. The money value of a win to a team in 2009 is projected to be ~$5M. So, if Crede can produce 1.8 wins for the team, then his value to that team would be ~$9M. Given that the free agent market is soft and that Crede has a heightened injury risk, he'd likely command far less. In fact, I could see the Reds getting him for ~$5M and a starting job (roughly what he received last year), which would seem to make him a good risk and a solid acquisition, especially since he has the upside to produce more than 1.8 value wins for the Reds. In fact, I wouldn't be surprised if Crede signed for less than $5M, as the market on him isn't very robust these days.

In the end, I suppose it all comes down to his ability to avoid injury, but at the right price that may be a risk the Reds would be wise to consider.
Posted by Lark11 at 1:37 PM