At this point in his career, Alexis Oliveras is still more about projection than production. However, I find him to be a much more interesting prospect than those older prospects who have developed to the point that they have reached far lower ceilings. It's the age old question, when valuing prospects how do you balance polish/certainty vs. projection/upside? For this list, when it is at issue, I'm putting more weight on upside than polish.

Outfielders like Chris Heisey, Sean Henry, and Shaun Cumberland are more polished and are further along in the development time-line than Oliveras. However, none of that trio projects as anything more than a 4th outfielder at the MLB level. At this point, Oliveras is much less polished and has a long way to travel on the development time-line, but if he does then he has a greater chance to be an impact player than the players with the lower ceilings.

Oliveras was drafted by the Reds in the 9th round of the 2007 draft out of the Puerto Rico Baseball Academy, Guaynabo, P.R. He was drafted at the age of 18. He was very raw and the Reds sent him to the Gulf Coast League, where he appeared completely overwhelmed. He posted a line of .191/.240/.253 in 47 games and 162 ABs. Clearly, he was raw and not ready for the professional game.

While his overall line was solid, there are a few redflags to his 2008 season. On the year, he hit line drives at a 10% clip and groundballs at a 63% clip. Given the age of the prospects in the GCL, I suspect that this is not uncommon. Clearly, Oliveras needs to get a bit more loft on the ball and increase his linedrive rate. In addition, he needs to add some strength to allow him to drive the ball with greater authority. However, his walk rate improved from 5.6% in 2007 to 8.5% in 2008.

Oliveras spent the majority of his time in centerfield, logging 20 games there, but also spent 15 games in rightfield. He logged 2 assists in center and 2 in right. He seems to be a competent outfielder, but his value would jump if he can stay in center, as he may not develop the bat to be a starting corner outfielder. In fact, his professional career may hinge on his ability to stick in center, though it'll depend on how well his bat develops.

Once again Alexis failed to put together a quality full season of play, but he did take a significant step forward. Not to mention, I can't help but be encouraged by his swing, which seems to be one that can make him a viable prospect.

While Oliveras certainly doesn't possess his tools or raw ability, his body type does remind me of Cameron Maybin. Maybin is a bit taller, but both are high waisted and have long legs. In addition, each seems to have a bit of electricity in their legs that makes them uneasy just standing around, seeming to prefer constant motion. Maybe it's an abundance of fast twitch muscle fibers or just too much sugar in their diet, but whatever it is they seem to have a bit more bounce in their step than other prospects.

Unfortunately, Oliveras still isn't very strong, but he has an average arm and above average speed. Hopefully, he'll continue to add muscle as he matures, as he'll need it to avoid being overpowered by more advanced competition.

Oliveras has a smooth left-handed swing, which is what first caught my eye.

He utilizes a significantly wider than shoulder width stance, which prevents him from using any kind of stride at the plate. In addition, he hits out of a bit of crouch, which looks a bit unusual given the wide stance that he employees. Like most hitters who utilize the wide stance, he doesn't use a stride. The width of the stance results in a hitter being limited to simply lifting his front foot up and setting it right back down to trigger his weight transfer. However, when Oliveras sets the front foot back down, he has the tendency to open it up. When he first gets into his hitting stance, his toe is pointed directly towards homeplate, but when he sets the foot back down after his stride, the toe is often pointed more towards third base than it was before the stride. This new front foot position can lead to Oliveras opening his hips too soon, which bleeds power from the swing. If the hips fire too soon, then it becomes more of an arm swing, which results in the hitter rolling over the ball and generates a lot of weak groundballs to the right side of the infield (which helps explain his high groundball %). 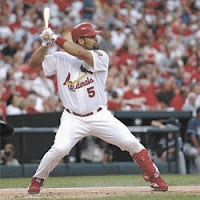 While I usually don't mind a wider stance and a negligible stride (it has worked wonders for both Joe DiMaggio and Albert Pujols), I'd actually like to see Oliveras shorten up his stance and take a longer stride at the plate. I think that would help him drive the ball a bit better and prevent him from firing the hips too soon. As it stands now, he isn't getting enough line-drives, instead hitting the ball on the ground a high percentage of the time.

Oliveras employees a high hand position, as he takes his stance with his hands up by his left ear. This isn't uncommon and is a pre-pitch hand position shared by fellow prospect Yonder Alonso. As the pitch is delivered, Oliveras lifts his front foot to begin his weight transfer and brings his hands down and back to shoulder level, which puts them into a good hitting position. Overall, Oliveras gets into good hitting position when the pitch is delivered. 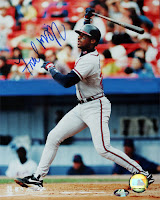 After the swing passes through the hitting zone he takes his top hand off the bat, but he has a much shorter follow-through than is typical for one handed finishers. He doesn't release the bat on the follow through and let it come all the way around in typical fashion, but rather restricts its movement at the finish of the swing. It more resembles the Fred McGriff follow-through than the classic Will Clark follow-through. While this is typically just an aesthetic difference, sometimes cutting the swing short can result in a loss of power. If the hitter is restricting the swing too soon, then he may be limiting his shoulder rotation. If the hitter isn't getting good shoulder rotation, then the bat may actually be decelerating at the point of contact, which would obviously reduce the power generated. Right now, Oliveras seems to get sufficient shoulder rotation, so it's not likely a problem, though I wouldn't mind seeing him "let the swing go" a bit more, as it might help him tap into a bit more power as he climbs the ladder. He'll never be a power hitter, but he'll need a bit more pop if he is going to develop into a prospect of note.

You can see his scouting video here.

While Oliveras still has a LONG way to go on the road to the majors and plenty of time to take a wrong turn, for now he checks in at #25. Last year he was under the "Other Notables" and he took enough of a step forward for me to reward him with the last slot on the big list. Once again, Alexis showed JUST enough to pique my interest. He may ultimately never pan out, but for now he's more interesting to me than the Chris Heisey types who project as nothing more than 4th outfielders and, besides, we've heard enough about those guys already. Still, he's admittedly a bit of a long shot to make it to the majors and have a productive MLB career. Even so, Oliveras gets the nod for the 25th slot, but he'll have to show something more in 2009 to warrant inclusion on the 2010 list.
Posted by Lark11 at 9:52 PM