Matt Murton arrived in the majors with a bang in 2005, hitting .321/.386/.521/.907, but so far that has been the high point of his career. Despite his hot start, Murton has never been given an extended look in the starting lineup with the Cubs, who prefer bringing in big money free agent outfielders (Alfonso Soriano, Cliff Floyd, Jacque Jones, etc). That said, Murton is just far too good of a hitter to not be on this list.

He was drafted by the Boston Red Sox as a supplemental pick (#32 overall) in the 2003 amateur draft. Murton was subsequently dealt to the Cubs along in the famous 4 team trade that netted the Red Sox Doug Mientkiewicz, Orlando Cabrera, and the 2004 World Series title.

Despite clearly being overqualified for the minors and talented enough to warrant some type of role at the Major League Level, Murton spent time in AAA with the Iowa Cubs in 2007. During his time there, Murton posted a line of .331/.407/.570/.977.

Clearly, Murton is a big leaguer, even if the Cubs haven't come to that realization as of yet.

That said, the important thing about Murton is that it is not an empty .300 average. He backs it up with strong on base skills, which only increases his value. 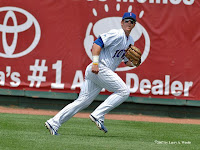 Murton is a very strong defensive leftfielder. Unfortunately, his arm limits him to leftfield, but he plays a top flight leftfield. For his career, Murton has a .986 fielding percentage and has posted a .900+ Revised Zone Rating in 2006 and 2007. His range stacks up well against the competition, as it would put him second behind only Eric Byrnes among the 2007 qualified leftfielders.

Murton is fundamentally sound, reads the ball off the bat very well, and has very good range. His arm has never been a strength, but he plays a very strong leftfield.

Baseball America ranked Murton the 11th best prospect in the Cubs system in the 2005 Prospect Handbook.

Not only did general manager Jim Hendry pull off a four-team trade at the deadline last July that netted Nomar Garciaparra and Alex Gonzalez, but he also picked up Murton as well. Murton has the best pure hitting skills and strikezone judgment in the system. The Expos weren't interested in getting Murton from the Red Sox in the trade, so Hendry offered to give up Harris and take Murton at the last moment. He always hit well with wood bats in the Cape Cod league as an amateur, and Murton has had little trouble adapting to pro ball. Scouts don't project him to have quite as much power as they did when he was at Georgia Tech, but he should be at least a 20-homer guy. He needs to add loft to his swing to become more of a longball threat. He can put on a show in batting practice, having won home run derbies at the Connie Mack World Series (1998), Cape Cod League All-star game (2002), and Florida State League All-star game (2004). Murton is a good athlete for his size and has average speed. His biggest drawback is a weak arm that limits him to left field. He'll head to double-A this year and could be ready for Wrigley Field at some point in 2006. 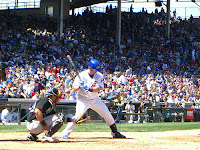 The 2007 Baseball Prospectus included the following about Murton:

Murton's debut generated some fairly lofty expectations for 2006, and, except for a miserable stretch in June, he fully met them. Being a rookie and hitting a wall while playing for Dusty Baker meant that he lost his job for a while, of course, but his resurgence and the team's losing guaranteed him a spot in the second half. He has more power than comes through in his stats because his swing is so level; if he ever decides to alter it to add a little loft, he's liable to go from 10 to 30 homers in a flash, which will likely result in some unfortunate accusations given the tenor of the times. 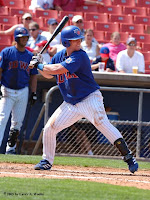 Murton seems to have gotten lost in the shuffle. He's a natural hitter, but lacks the top drawer power that reigns supreme in this age of steroid induced gorilla ball. However, the thing that is holding him back more than a lack of power is simply the lack of an opportunity.

The Cubs are a large market team that is always looking to make a splash, so Murton's professional approach at the plate and solid, but unspectacular game may not be enough to get him a shot at a starting job. Alfonso Soriano is the prime example and he looks to be looked However, he's a professional hitter who could blossom when given a full-time job.

Perhaps, the best thing that could happen to Murton is being dealt to a team that focuses on what he can do, rather than what he cannot.
Posted by Lark11 at 4:22 PM