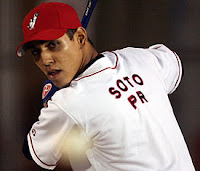 When Neftali Soto first caught my eye with his performance in the Gulf Coast League, I thought Soto was yet another example of our Latin America Baseball Academy bearing fruit. However, Soto is from Puerto Rico, which made him draft eligible. Regardless of how the Reds got him, it's a good thing that they did.

Soto is 6'3 tall, 180 lbs, bats right, and throws right. He attended Colegio Marista High School in Puerto Rico, where he broke the youth homerun record of Juan Gonzalez. Obviously, he has a great deal of power potential.

Soto made his professional debut for the Gulf Coast League Reds and acquitted himself admirably for an 18 year old. Soto got into 40 games and in 152 ABs posted a line of .303/.355/.454/.809. He hit 2 homers and was successful in his 2 stolen base attempts. His 31/11 K/BB ratio wasn't bad for a young ballplayer in his first professional season. However, his on base skills are far from ideal, so hopefully more experience will lead to a more disciplined approach at the plate.

His 2007 season was shutdown early due to minor elbow inflammation in August, but it shouldn't be of long term concern.

Soto has a long, smooth swing that should generate even more power when he fills out. Not to suggest in any way, shape, or form that he has similar offensive potential, but his style reminds me a bit of Joe DiMaggio. He has a wide batting stance which provides a solid base. The wide stance limits the length of his stride, which is essentially just picking up his foot and putting it right back down. He gets good extension in his swing. For some reason, lefthanders always seem to have longer, more flowing swings, but DiMaggio had it from the rightside and I see a bit of it in Soto's swing.

Of course, a longer swing can simply mean more holes for the pitcher to exploit, so it may not be such a good thing for Soto. Soto's swing is a bit inconsistent and he'll need to refine it a bit to be successful. It'll be interesting to see if more advanced competition can exploit his longer swing or if Soto can maintain his level of performance by adding strength. His strikeout totals should tell the tale. Either way, it seems unlikely that Soto will ever hit for a high average, but his power potential could offset it. Improvement in his on base skills would also help offset a low batting average, but it's too soon to tell if he'll be able to do so.

You can access the link to Soto's MLB scouting video here.

Scouting reports grade Soto's arm as average, but it appears to be a tick below average. He utilizes a high three-quarters motion, which can cause the ball to sail. In the field, his footwork is good, but he takes long, deliberate strides which may ultimately force him to move off shortstop. His first step quickness isn't good and bulk added from maturity will likely reduce his already borderline range.

In 2007, Soto posted a .913 fielding percentage at shortstop and played 4 games at 3rd base, which may be his ultimate destination.

Soto probably isn't a shortstop, but he has good offensive potential. His career got off to a nice start, but it was a fairly small sample size and he's got a long way to go to reach the majors. Ultimately, more advanced competition may expose more weaknesses and reveal that Soto isn't a blue chip prospect.

There are a lot of wrong turns on the road to the majors and Soto could easily take one, but at this stage it's difficult to overlook his upside, which is why Soto gets the nod at #11.
Posted by Lark11 at 10:40 AM