The Reds have never been shy about scouting north of the border, drafting the likes of Philippe Valiquette, Joey Votto, and Kyle Lotzkar to name a few, but Votto is clearly the class of group. The Reds selected Votto in the 2nd round with the 44th overall pick in the 2002 draft.

After a down year in 2005 in which he hit only .256/.330/.425/.755, Votto bounced back in 2006 to establish himself as the premiere first base prospect in the minors. It's odd that Votto is the top first base prospect in the minors, considering that he was originally drafted as a catcher. Taking that into account, it's not surprising that Votto is still raw at first base, where his hands are below average, he occasionally finds himself out of position, and his footwork still needs work.

However, since Votto is a hard-worker who is always looking to improve his game, these defensive deficiencies will likely be improved upon. Votto has even become a threat on the base paths through his dedication and hard work.

At the plate, Votto has a quiet setup. He utilizes the whole field well, he's equally adept at going to the opposite field or turning on 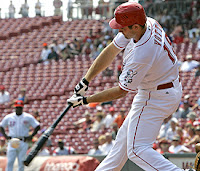 an inside pitch. Unlike many lefthanded hitters, Votto doesn't let go of the bat with one hand on his follow through. In fact, he's got a fairly compact swing for a power hitter, but since he still gets good loft on the ball it doesn't limit his power. Votto also stays on the ball very well, so he can drive the ball with authority to the left-center field gap.

In 2007, Votto had a line drive percentage of 34%, which helps account for his .321 batting average. Of course, Votto is not going to be able to hit that many line drives next year, but Votto does have the requisite skills to post a high average.

In addition to his solid hitting skills, Votto possesses some of the best on base skills in the Reds system. Oddly enough, Votto bears many similarities to the man he will be replacing in 2008, Scott Hatteberg. Both have strong on base skills and take a professional approach, but Votto has more power. However, a better comparison for Votto may be Lyle Overbay, a professional hitter who provides solid production, but doesn't have elite power traditionally found at the position.

Votto's professional approach at the plate earns him the #4 spot on the list.
Posted by Lark11 at 1:15 AM