No Gold Glove for the Franchise 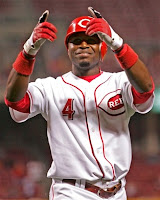 The National League Gold Gloves were announced today and Brandon Phillips came up short, as Orlando Hudson brought home the 2b Gold Glove.

While Hudson may have won this award due in large part to his incumbent status, he's not a poor choice.

Phillips had a higher revised zone rating, but his Defensive Win Share performance ranks behind Hudson (Win Shares isn't prorated by playing time, so Phillips' WS is higher because he played more innings.) In addition, both Utley and Hudson track down more balls out side of their zone than Phillips.

All in all, it's difficult to argue against the selection of Hudson, but if Phillips had won the award last year, then he likely would have won it again this year.

As in politics, incumbents have a distinct advantage in the Gold Glove award.
Posted by Lark11 at 4:08 PM