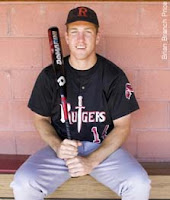 Todd Frazier is a baseball player. That sentence may not seem like it says much, but in reality it says it all. The description seems to fit him better than most. In fact, it seems to describe him through and through.

Frazier started his baseball career out strong, by leading his Toms River New Jersey team to the Little League World Series title in 1998. Baseball is in his blood. He even has two brothers who have played professionally. Frazier continued his career at the University of Rutgers, where he posted a .897 OPS in 2005, a 1.070 OPS in 2006, and a 1.259 in 2007.

The Reds drafted Frazier out of the University of Rutgers with the 34th overall pick in the 2007 draft. The Reds received the 34th overall pick as compensation for losing free agent Rich Aurilia, which again just illustrates the importance of embracing a degree of player turnover. On top of his overall impressive skill set, Frazier has a tremendous understanding of the game. Some players have the athletic ability, but not the baseball IQ. Others have the baseball IQ, but not the skill set. Frazier is one of the few prospects who possesses both.

Frazier didn't waste any time making his mark in the professional ranks. The Reds sent him to Billings of the Pioneer league, where he posted a most impressive .319/.409/.513/.922 in 160 At Bats. To top it off, Frazier posted an impressive 22/18 K/BB ratio and had 5 home runs. His performance earned him a promotion to low-A Dayton, where he continued his offensive tear against the more advanced competition.

All in all, it's hard to imagine a more impressive start to a career. Frazier not only displayed tremendous hitting ability, but also very strong plate discipline. He clearly has a well rounded offensive skill set, including the plate discipline that so few young prospects possess.

Frazier has plus power with a line-drive swing. He uses a fairly wide stance with a small stride. He has good bat speed, despite a slightly unorthodox technique that robs his swing of any aesthetic beauty. Frazier uses a slight hand twitch as a trigger mechanism to start his swing. It may cause problems in the future, but for now it isn't impacting his performance. A better fastball found at the more advanced levels may be able to find a hole in the swing caused by the trigger, but so far so good.

Frazier has a polished approach and demonstrates good control of the strikezone, which enables him to post strong on-base numbers. When he does get on base, Frazier acquits himself well. He lacks top notch speed, but he's a smart baserunner and a good percentage player.

Frazier isn't the most graceful ballplayer, but his approach works well for him, and production

always trumps style. It'll be interesting to see how he performs at the upper levels, as polished college players should have good success at the rookie level and A ball. However, the real test for Frazier will come against Double-A pitching.

You can access an ESPN video about Frazier here.

Frazier has a fundamentally sound game. He gets in good fielding position, but his footwork is suspect. He lacks first step quickness, so his range is below average at short. He's a big guy who just doesn't move all that well at shortstop. His arm strength is above average and he has good accuracy. However, his skills and defensive abilities profile well at the hot corner. The Reds are likely to move him to third sooner rather than later. 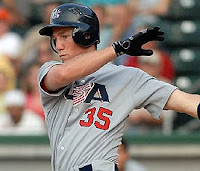 Frazier has all the tools to be an impact player in the Major Leagues, but its more than his baseball skills that make him a blue chip prospect, its the intangibles. Scouts rave about Frazier's baseball IQ and instincts. Frazier's style is a bit unorthodox, but its been working very well for him. It'll be interesting to see if more advanced competition can expose any weaknesses in Frazier's game. Until that time, he'll continue to roll, all the way up the organizational ladder.