The Rath of Cust 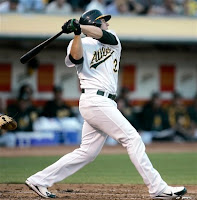 It's not so much Cust's arrival that sticks in my mind, but rather the fact that he almost didn't arrive at all. Cust had had a cup of MLB coffee here and there, but never an opportunity for consistent, MLB playing time. In fact, it took a forward thinking GM, a series of injuries at the MLB level, and a white hot start to make Cust a fixture in Oakland. If all those elements didn't combine together in just such a fashion, then the 28 year old Cust may have missed his MLB window entirely.

There just seems to be something unjust about a player not getting the opportunity to test himself at the highest level, whether due to injuries (Mark Prior), racism (Josh Gibson), or just a lack of an opportunity (Roberto Petagine).

Prior to free agency, this type of situation likely occurred more often. Organizations often had substantially more minor league affiliates than is standard in the modern game. Teams with strong farm systems had talent at every position, but only 25 spots available at the MLB level. The player's inability to move to a new organization meant that he had no choice but to wait for an opportunity at the big league level.

The modern game has made this situation less frequent, as free agency and the Rule V draft have increased opportunities for players to reach the majors. In addition, the wave of statistical analysis that has swept through the game has given a much clearer picture of the best, most deserving ballplayers.

Thinking about the fact that Jack Cust almost never got the opportunity he needed to play MLB ball made me think of another player who may have deserved better than he got.

One time Cincinnati Red Morrie Rath may have been a player that never got the credit or opportunity he deserved. He's likely known, if known at all, as the 1st batter of the 1919 World Series that Eddie Cicotte plunked to signal to the gamblers that the fix was on.

However, Rath could possibly have been much more than that. Bill James once discussed Rath in his Historical Baseball Abstract, pointing out Rath's strong on base skills and tremendous defense as skills deserving of a full-time job. In 1912, Rath hit .272 with 95 walks, 104 runs scored, and only 19 RBI. In addition, James has Rath listed as deserving of the Win Shares Gold Glove during that season. However, Rath slumped in the first part of the 1913 and was sent to the minors for 6 years. He resurfaced with the Reds in 1919 and had a solid season at age 32, again rating as the Win Shares Gold Glove Winner, but he saw his playing time decrease in 1920 and he ended up out of baseball.

It may have been that his skillset was not valued highly or just poor timing, but it seems like Rath deserved a legitimate chance to be an MLB second baseman. Unfortunately, Rath never quite seemed to get that opportunity. He was out of baseball at age 33 and sadly committed suicide in 1945.

How different would the life and career of Morrie Rath have turned out if he had better timing or received a better opportunity? Would he have been mentioned in the same breath as Joe Morgan and Bid McPhee in discussions of most valuable Redleg second basemen?

How many other Major League careers have suffered the same fate?
Posted by Lark11 at 2:56 PM