It's hard to describe just how good Johnny Cueto was in 2007. He dominated at three separate levels of the minor leagues. In fact, he only seemed to get better as he climbed the ladder. His performance almost warrants the #2 slot on the prospect list, but he didn't quite pass Homer Bailey.

All in all, it was truly an extraordinary performance from Johnny Cueto. 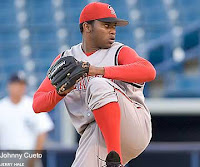 Cueto is small in stature, standing only 5'10" tall and tipping the scale at 192, but he has a big arm. He throws a 92-94 mph fastball that occasionally touches 96. He works with a free and easy high three-quarters delivery and can locate the fastball to each side of the plate. Cueto also picked up a changeup from the instruction of former Red great Mario Soto that quickly became an MLB league average pitch. In addition, Cueto also throws a slider that can overmatch hitters at times.

Cueto's size raises durability concerns, but for now he seems to have a rubber arm. His arms are long, which gives him good leverage and may prevent him from wearing down. As if to answer questions about his durability, Cueto also pitched in Dominican Winter League, where he pitched 22.0 innings and posted a 3.10 ERA with a 1.18 WHIP. He continued his impressive display of power and command, posting a 22/6 K/BB ratio.

Cueto's 2007 performance has earned him a long look at a spot in the starting rotation in Spring Training. If he doesn't make the squad out of spring training, then he'll return to Triple-A Louisville to continue to refine his pitches. At this point, he doesn't seem to have much left to prove or work on, so he should be up in the Majors in the very near future.

Cueto's extraordinary season earns him the #3 spot on the list.
Posted by Lark11 at 2:34 AM