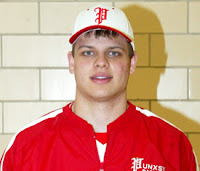 The Reds continued to adhere to the new draft philosophy implemented by scouting director Chris Buckley when they selected Devin Mesoraco with the 15th overall pick of the 2007 draft. Under Buckley, the Reds have focused on acquiring strong, up the middle talent in the draft. It started in 2006 with centerfielder Drew Stubbs and shortstop Chris Valaika and continued in 2007 with catcher Devin Mesoraco and shortstops Todd Frazier and Zach Cozart.

Mesoraco was drafted out of Punxsutawney High School in Pennsylvania. He's 6'1, 200 lbs, bats right, and throws right. Mesoraco was a 19 year old senior when the Reds drafted him, so he is a bit older than expected. Accordingly, he'll already be 20 in June of next season.

There really isn't a euphemistic way to say it: Mesoraco's professional debut went over like a lead balloon.

While there certainly isn't much to get excited about here, there also isn't much cause for concern either. Mesoraco was 19 years old and getting his first taste of professional ball. In addition, he was playing through lingering injuries to both thumbs, which also hindered his performance.

The sample size is too small and there are just too many variables to draw any conclusions from his 2007 stats at this point. 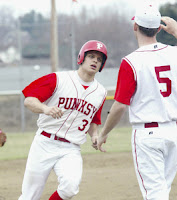 Mesoraco has a nice collection of offensive skills. He makes good contact, possesses good power, and has good pitch recognition. In addition, he runs well...for a catcher.

At the plate, Mesoraco uses a wide stance, which limits the length of the stride. In fact, he essentially just lifts his front foot and puts it back down in the same spot. Given that he lacks a stride, Mesoraco relies on weight transfer to get his body moving towards the pitch. Prior to the pitcher's windup, he rocks back and forth slightly from his front foot to his back foot. When the pitcher starts his windup, Mesoraco flexes his left knee to shift his weight onto his front front. When the pitcher gets ready to release the ball, Mesoraco straightens his left knee to transfer his weight to his back foot to load up for the pitch.

He seems to use this rocking type motion in his pre-pitch routine to improve his weight transfer during the swing and offset the impact of his no-stride approach. The lack of a stride at the plate may have made it difficult for him to consistently get his weight moving forward to attack the pitch. The rocking motion that he uses offsets this, as it enables him to effectively get his weight moving forward towards the pitch.

However, the one problem that Mesoraco seems to have may be related to this technique. Mesoraco can occasionally get out on his front foot a bit too much in his swing. This is likely a byproduct of his no-stride approach, as his weight transfers forward in the swing, but his front foot does not move forward, so he can get too far over his front foot in the swing.

You can access the link to Mesoraco's MLB draft video here.

Overall, Mesoraco is a very good athlete and has a very nice offensive skillset. Ultimately, he could develop into the rarest of the rare: the offensive catcher. 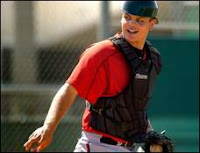 Mesoraco has all the tools to be a very strong defensive catcher. Despite undergoing Tommy John surgery in 2006, Mesoraco has plus arm strength and very good accuracy. His arm action is short and compact, which is what you like to see in a catcher. In addition, he's got good footwork, which enables him to get into a good position to throw.

Mesoraco is a good receiver, as he has soft hands and is accomplished at blocking balls in the dirt. He also has strong leadership skills and a baseball IQ that is off the charts. In short, defensively Mesoraco is exactly what you look for in a catcher.

At this point, there's no need to worry about his slow start in 2007. He got his feet wet and knows what to expect from professional baseball. He can use this off season to get healthy and take what he learned last year to better prepare for the 2008 season.

All in all, I expect a big step forward from Mesoraco in 2008 and he could move well up the list with a strong performance. At this point, he hasn't shown much and high schools catchers are second only to high school pitchers in terms of the risk of flaming out, so he still needs a lot of development time. The best case scenario for Mesoraco is that he develops into the Cincy version of Dodger catcher Russell Martin.

For now, his impressive overall skillset and his intangibles land him at #8 on the list.
Posted by Lark11 at 1:26 PM